Murray Lawnmowers – Value for Your Lawn

Home ownership is a central component of the American Dream. Almost everyone has visions of waking up in their own home in the suburbs on a Saturday and running out to play catch with the kids or hosting a neighborhood barbeque. Instead, we find ourselves waking-up on Saturday morning to a foot-high forest of grass in the backyard, and we spend our day caring for the lawn instead of enjoying it.

There is a better way!

Murray Lawnmowers are designed to help you care for your lawn quickly and get on with life…they allow you to spend more time enjoying your yard, rather than caring for it. 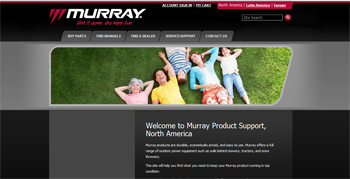 One of the most important considerations for many lawn owners is speed. Many low-cost mowers sacrifice power in order to lower the price, but this often leads to missed patches of grass that have to be re-mowed. Murray lawnmowers are equipped with powerful motors and designed with large wheels for easy maneuverability. Each aspect of a Murray is intended to get you done with maintenance quickly so you can enjoy your yard.

Variety: the Spice of Murray Lawnmowers

Murray produces many different models of lawnmowers. There are five lighter push models for those with smaller lawns such as might be found around a typical suburban home. Murray also make ten models of self-propelled walk behind mowers to make it easier to maintain larger lawns. Additionally, they produce eight models of riding or tractor style mowers for commercial properties or homeowners with large acreages. Murray even produces several electric models, which can be powered by either a battery or an extension cord. These models are designed primarily for very small patches of lawn located close to houses or apartments in urban areas.

Murray tends to spend less on advertising than many other brands such as John Deere or Toro, so they don’t have as much name recognition as those brands. They also tend to be sold at large discount stores like Walmart or Target, so they have a reputation as a discount lawnmower. Yet customers generally report satisfaction with all Murray models, and the riding models are particularly well regarded.

Murray mowers are usually priced much lower than their competitors, and most consumers are pleasantly surprised at the reliability of the equipment compared to the purchase price. All Murray lawnmowers have a two year warranty, but many owners report using their Murray for ten years or more without difficulty. Because their competitors are usually two or three times as expensive, it is possible to purchase a Murray every fours years and it would still cost less.

Of course, not all reviews of Murray are favorable. One of the major complaints regarding Murray lawnmowers has been their customer support. Their website seems geared primarily at the European market, and many Northern American consumers find it difficult to find either parts or authorized dealers by using the site.

They also do not have a list of products on the North American version of the site, so a United States owner or interested consumer has to navigate the European site to find available models. Additionally, it is usually difficult to find replacement parts for Murray lawnmowers at local supply stores, though they have made significant strides in making parts more available through online retailers, and their own site features a parts selection.

Murray has also suffered some unflattering press in the last couple years due to a large recall. A consumer safety group reported that the plastic covering used to shield the operator from debris was not strong enough and could crack under heavy use.

In other words, as the mower was cutting larger items like twigs the small pieces could pierce the shield and fly off in any direction and injure bystanders, whereas other manufacturers use metal or fiberglass shielding that is more resistant to damage. Though there were no reported injuries, Murray voluntarily recalled over eight thousand mowers and replaced the shields as a precautionary measure. Despite the commendable preemptive recall, Murray still is dealing with the negative public perception of product safety.

However, many of the complaints regarding Murray motors are common to any mowers. Repair shops have reported that people come in complaining about their “cheap Murray lawnmower” breaking down, but the repair person realizes that the owner was not using the machine properly.

For example, many complaints deal with a stuck blade, but oftentimes this is due to mowing the grass shortly after a rain. Almost any mower has difficulty with wet grass. Another common complaint is an oil leak, but Murray representatives have shown that this is typically due to either overfilling the oil reservoir or improper maintenance.

When Murray mowers are properly cared for, they tend to last for well beyond their published life expectancy.

Quality Under the Hood

Since the 1990s they have also reduced the carbon footprint of their engines by almost seventy-five percent, meaning that Murray motors benefit the environment beyond the borders of your lawn. Sometimes Murray lawnmowers are even sold under the Briggs and Stratton brand name in the United States.

Whether you have a small patch of grass in the city or a large homestead in the country, Murray makes a lawnmower to fit the size of your lawn. Because Murray distributes its mowers through discount stores, they also fit the size of almost any budget. When they are properly maintained, Murray lawnmowers can last as long or longer than more expensive brands, meaning that you can spend less money caring for your lawn and more on discovering new ways of enjoying it.